THINGS THAT CANNOT BE TRACED: 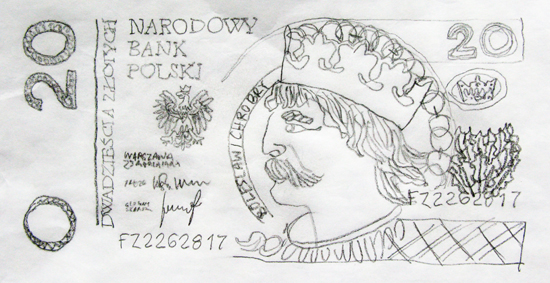 My last 20 zlotys, traced onto a sandwich bag.

Today I was trapped in a fairly small bathroom for upwards of five hours. All I could think of at first was, “Wow, I’m glad this isn’t an elevator.” Then again, I don’t know why I’d walk into an elevator first thing in the morning in order to relieve myself.

The door knob was busted, especially after my numerous attempts at breaking out. There was nobody home, and nobody really within earshot. The only thing left was a toilet (thank God), a sink, and a shower. And my toothbrush, toothpaste and floss. And some cuticle scissors to do my nails. And numerous scrubs, creams, and cleansers.

Okay, so basically it was a day at the spa.

Recently I’ve been editing a short film using footage from numerous Hollywood movies that take place on islands, including the Tom Hanks movie Cast Away. I couldn’t help but feel like Hanks’ character several hours in. While he was spending hours trying to get to the inside of a coconut, I was eying the Trader Joe’s body scrub that read, “Made of so many natural ingredients, you could eat it!” His beard grew unwieldy and sun-soaked, and I had a nice, long shave. While he slept cowering in the nook of his life raft, I also slept along the floor, thankful for the existence of a bathroom rug. For a couple hours, I had a good feeling of what it might be like to be stranded on an island, with no contact to the outside world, for years. Bathroom Island.

However, I empathized with Hanks’ character most due to my purposeful napping, which wiped out any sense of time I may have surmised. Without a clock, a strange fear resided in that room: I may never leave, or I maybe I’d been in there for days already, or maybe, most frighteningly, I’d only been in there for minutes. I could’ve had a nice day in there, despite it being a ladies’ bathroom (and therefore containing nothing to read), but without knowledge of the time of day, or how long I’d been inside, I was desperate to be out. As if the knowledge of  would guard me from the insane possibility that I could be stuck in there forever.

When I strong-armed the window open, a pipe across the alley jutted out over the ground, perfectly parallel. The sun beat down just so that a clean shadow emerged from the pipe and ran down the wall. I spent a good ten minutes watching that shadow, just waiting for it to shoot straight down, because then I’d be sure it was noon. And that one minute of stabilization was all I wanted.